The Corporate Governance Statement of Arion Bank hf. (Arion Bank or the Bank) is based on the legislation, regulations and recognized guidelines which are in force at the time the Bank's financial statement is adopted by the Board of Directors.

In December 2015 Arion Bank was recognized as a company which has achieved excellence in corporate governance. The Icelandic Chamber of Commerce, SA – Business Iceland, Nasdaq Iceland and the Center for Corporate Governance at the University of Iceland have signed a partnership agreement under which companies are given the opportunity to undergo a formal assessment of their corporate governance. Arion Bank received this recognition following an in-depth survey of corporate governance at the Bank, including governance by the Board of Directors, sub-committees and management, performed by KPMG ehf. in the autumn of 2015. The recognition applies for three years unless significant changes are made to the Bank’s management or ownership.

Article 1.1.6. assumes that the board of a company shall post certain information on the candidates to the board on the company’s website. This has not been considered necessary given the current shareholder structure but the information in question has been sent to shareholders before the AGM.

Arion Bank is a financial institution which operates in accordance with the Financial Undertakings Act No. 161/2002. Acts of law which apply to the Bank’s operations include the Financial Undertakings Act No. 161/2002, the Securities Transactions Act No. 10/2007 and Public Limited Companies Act No. 2/1995 and the Competition Act No. 44/2005. The Bank is a universal bank which provides a comprehensive range of financial services relating to savings, loans, asset management, corporate finance and capital markets. The Bank has issued financial instruments which have been admitted for trading on regulated securities markets, in Iceland, Norway and Luxembourg, and is therefore subject to the disclosure requirements of issuers pursuant to the Securities Transactions Act No. 108/2007 and the rules of the relevant stock exchanges.

The Financial Supervisory Authority (FME) supervises the operations of Arion Bank in accordance with the provisions of Act No. 87/1998 on the Official Supervision of Financial Operations. Further information on the FME and an overview of the legal and regulatory framework applicable to the Bank, and the FME’s guidelines, can be seen on the FME’s website, www.fme.is . Numerous other pieces of legislation apply to the Bank’s operations. The relevant legislation can be found on the website of the Icelandic parliament, the Althing, www.althingi.is.

Internal control at Arion Bank is organized into three lines of defence with the aim of ensuring effectiveness, defining responsibility and coordinating risk management. This structure is also designed to foster a sense of risk awareness and responsibility among all employees of the Bank.

The set-up distinguishes between the following roles:

The first line of defence is made up of people who have day-to-day supervision of operations and its organization. They are responsible for establishing and maintaining effective internal controls and managing risk in day-to-day operations. This involves identifying and evaluating risk and putting in place appropriate countermeasures to reduce risk. The first line of defence is responsible for supervising the implementation of internal rules and processes in compliance with the law, regulations and the Bank’s strategy and it must ensure that all actions are in compliance with established procedures and that corrective action is taken if any deficiencies are detected.

The third line of defence is Internal Audit, which keeps the Board and management informed of the quality of corporate governance, risk management and internal controls, including by performing independent and objective audits.

Compliance and measures against money laundering and terrorist financing
Arion Bank seeks to detect any risk of failure to fulfil its legal obligations and has taken appropriate measures to minimize such risks.

Compliance had seven employees at the end of 2015.

Risk management
A central feature of the activities of all financial companies is carefully calculated risk-taking according to a predetermined strategy. Arion Bank thus takes risk which is compatible with its risk appetite which is regularly reviewed and approved by the Board of Directors. The Bank’s risk appetite, set by the Board, is translated into exposure limits and targets that are monitored by Risk Management. The Board is responsible for Arion Bank’s internal capital adequacy assessment process, the main objective of which is to ensure that Arion Bank understands its risk profile and has systems in place to assess, quantify and monitor its total risk exposure.

The Bank’s Risk Management division is headed by the Chief Risk Officer. It is independent and centralized and reports directly to the CEO. Risk Management comprises five departments whose role is to analyze, monitor and regularly report to the CEO and Board of Directors on the risks faced by the Bank.

The audit is governed by the audit charter, directive No. 3/2008 issued by the FME on the internal audit function in financial institutions and international standards on internal auditing. All audit work is completed by issuing an audit report with deadlines for the implementation of audit findings. Implementations are followed up by the Internal Audit every quarter.

Internal Audit had seven employees at the end of 2015.

The management and employees of Arion Bank are conscious of the fact that the Bank’s activities affect different stakeholders and society at large. The Bank’s code of ethics is designed to serve as a key to responsible decision-making at Arion Bank. The code of ethics is approved by the Board of Directors.

One of the fundamental principles of corporate social responsibility is to align the interests of companies with those of the wider community. Arion Bank is a responsible member of Icelandic society and as such takes an active role in its construction and future development. Corporate social responsibility means that the Bank must perform its role conscientiously, ensuring that its customers receive first-rate services and get the support they need. The Bank also supports a select number of causes which it believes benefit and improve the community. Many of these projects require the active participation of employees, which is the key to achieving results.

Board of directors and committees

The Board of Directors is elected for a term of one year at the company's annual general meeting. At Arion Bank’s last annual general meeting on 19 March 2015, seven Directors and three Alternates were elected to the Board of Directors. The elected Board Directors have diverse backgrounds and extensive skills, experience and expertise. In July Gudjón Gústafsson resigned as a member of the Board Audit and Risk Committee. Gudjón was replaced in the Board Audit and Risk Committee by Lúdvík Karl Tómasson.

In 2015 the Board of Directors met on 16 occasions. An Alternate was asked to attend one meeting during the year due to the absence of a Director.

The Chairman directs and is responsible for the work of the Board. The Chairman chairs Board meetings and ensures that there is enough time allocated to the discussion of important issues and that strategy issues are discussed thoroughly. The Chairman is not permitted to undertake any other work for the Bank unless part of the normal duties of the Chairman.

At the first scheduled meeting of the new Board following the AGM the Board appoints members to each of its sub-committees and assesses whether it is necessary to appoint external members to certain committees in order to bring in a greater level of expertise. One of the committee members in the Board Audit and Risk Committee, Lúdvík Karl Tómasson, is not a Board Director and is independent of the Bank and its shareholders. The Board sub-committees are as follows:

The Board has decided to go further than stipulated in the Guidelines on Corporate Governance with respect to the disclosure requirements of sub-committees. At every meeting the Board receives the minutes of the previous meeting of each sub-committee and are given access to all the information from the meetings of the sub-committees. 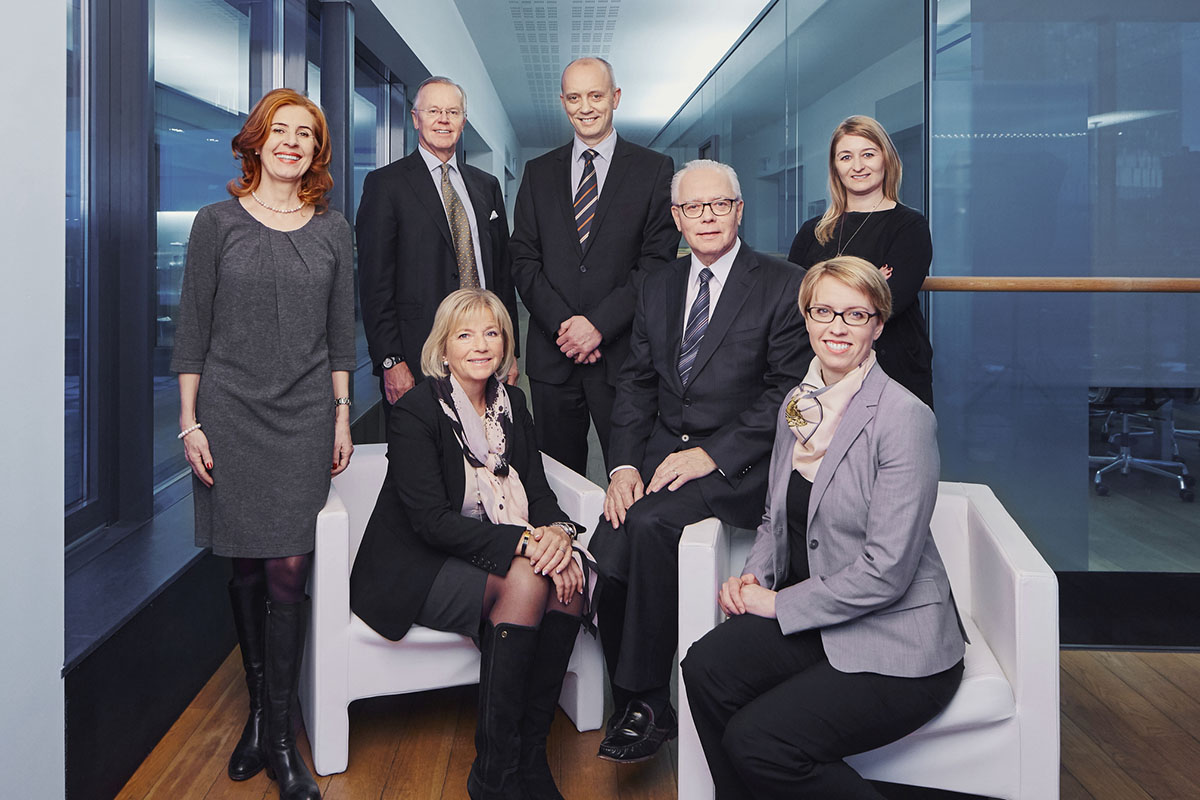 The Board carries out an annual performance appraisal, at which it assesses its work, the necessary number of Board Directors, the Board structure, achievements and work of the sub-committees with respect to the aforementioned. This appraisal was last performed by the Board at its meetings and between meetings during the period 16 December 2015 to 21 January 2016. 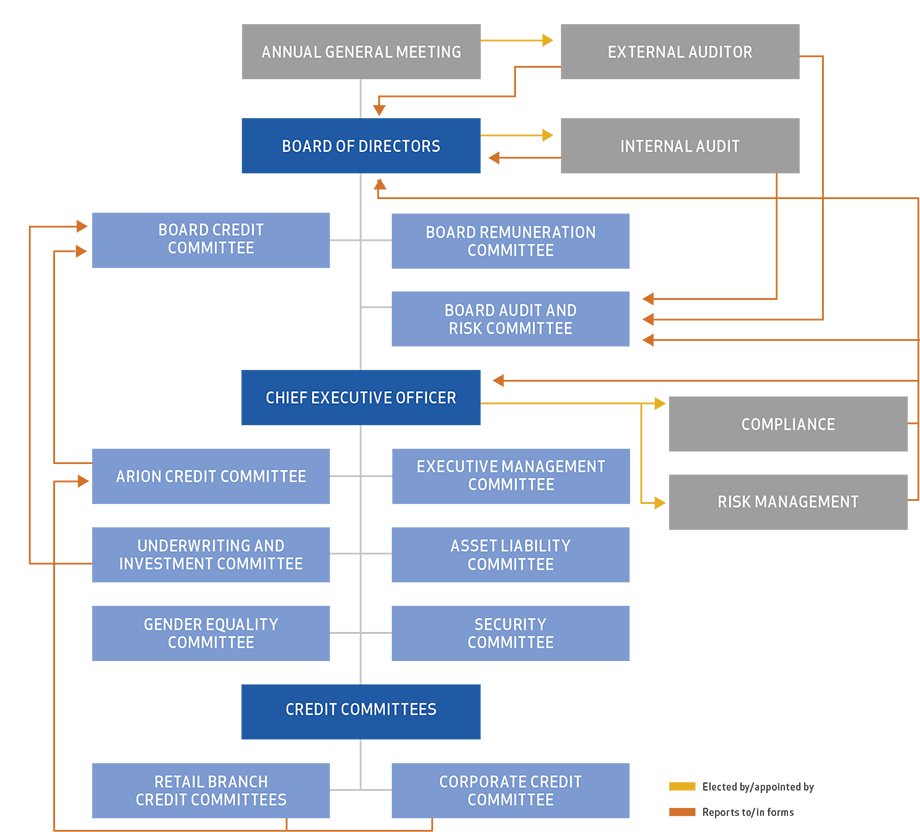